Create Your Free Account
Sign up Sell your Art
Just as Gothic architecture took but a feeble hold on Italy, so that of the Renaissance was not quickly accepted north of the Alps, owing to the still lingering vitality of the flamboyant Gothic style. When the Renaissance did spread into Europe, which was during the second half of the fifteenth century, it was first felt in France, a country always receptive to any new ideas in artistic expression. In France, as in Flanders and Germany, the new art was introduced by princes and nobles. Thus it was devoted more to secular than to ecclesiastical architecture. In many ways, the François I style can be said to keep its Gothic forms. It however abounds in charming Italian Renaissance elements that had been completely Frenchified. The medallion is highly characteristic of François I. Designed as the head or bust, in profile or full face, of a man or woman, carved in varying degrees of relief, it is set in a frame, generally round, composed of a wreath of foliage or a turned molding. The entire family of ornament known as grotesques, inspired by the Loggie frescoes of Raphael in the Vatican, invaded the decorative areas of paneled furniture, as on the façade of chests or chairs of box-like form, supplanting the linen-fold, tracery, and other popular Gothic motifs. All the ornament is varied, vivid, and fanciful.

This delightful period of Franco-Italian art came to a close toward the end of the reign of François I, when a purification of the style took place, resulting in the Henri II style of 1547-89. The structure of the furniture is modified in accordance with Renaissance principles, and the ornament is perfected. Pilasters are no longer decorated with grotesques but are properly fluted and display a capital and base. The chair, which under François I kept its massive paneled form, began to grow somewhat lighter, as the chair of box-like form gradually yields to the chair with an open frame. First the side pieces were removed, freeing the arms. Next, the back became lower. The legs are simply square or columnar, the latter having a molding suggesting a base and capital, and are joined close to the floor with substantial stretchers.

The genuine enthusiasm existing in France for the sculptured, elaborate, and architectural furniture being produced in Renaissance Italy gave a kind of family resemblance to French and Italian furniture, especially in the second half of the sixteenth century when French furniture became thoroughly saturated with the spirit of the Italian Renaissance. The engravings of Du Cerceau, who introduced many new models of furniture, examplify this fact. Not only was the walnut the fashionable wood in both countries, but the antique ornament – terms, lions’ heads, caryatids, dolphins, masks, pilasters, and acanthus, to mention but several – all derive from a common vocabulary.

French and Flemish pattern books issued in the second half of the sixteenth century illustrate the typical bed of this period. The tester is no longer hung from the ceiling, as in Gothic times, but is carried by four pillars which are replaced at times by terminal figures. 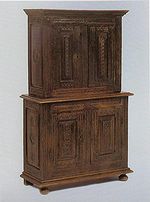 No piece of furniture exemplifies more aptly the style of Île-de-France than the important and fashionable double-bodied walnut cupboard, or armoire à deux corps, with the upper part a little less wide and a little less deep than the lower part and with its crowning pediment, triangular or sometimes arched and frequently broken. Decorating the two doors in each section are panels carved in low relief with long fluid nude figures of classical deities mirroring in their subtle refinement the graceful elegance of the stone sculptures by Jean Goujon. Sometimes the armoire à deux corps is further enhanced with finely veined plaques of marble inlaid in places wisely chosen. The armoire, the entire shape of which is quite architectural, reflects the influence of Pierre Lescot, Jean Bullant, and Philibert Delorme and embodies the highest qualities of French Renaissance crafstmanship. Also displaying finished workmanship is the walnut dressoir, a descendant of the Gothic dressoir, characterized by a rectangular horizontal body fitted with hinged doors and resting on an open lower portion.

The establishment of the Bourbon dynasty in the person of Henri IV, 1589-1610, was an important turning point in France’s cultural development, for the Bourbon monarchs regarded art as one of the essential factors contributing to the dignity and prestige of the state.

The Louis XIII style of 1589-1643 corresponds roughly to the first half of the seventeenth century, spanning that time during which the essence of the Louis XIV style was being developed. Because it is full of contradictions and comprises many incongruous elements, the art of this epoch does not possess a really national character. Spanish, Flemish, and Italian influences were all at work to produce a curious intermingling and exchange of ideas.

Louis XIII style furniture, essentially rectilinear in form, is rather simple and severe, as may be seen in the typical Louis XIII chair of square pattern, with an upholstered seat and back panel secured to the frame with decorative gilt or silvered nails, which the French engraver Abraham Bosse, 1602-72, so often represented in his charming engravings of domestic French interiors. The low backs are either square or of greater width than height. The legs of this low-back chair, which is stiff and square at all points, are sometimes columnar in form, standing on a box frame resting on small bun feet. The great majority of extant examples have, however, knobbed, baluster, or spirally turned legs joined with an H-form stretcher, with an extra stretcher joining the front legs above, which both strengthens and decorates at the same time.

Of interest are the fashionable ebony cabinets distinguished by their simple, square, and massive structure. Incised foliage and floral scrolls were often engraved on the surface not enriched with the very flat carvings, which chiefly depicted religious or mythological themes. The heavy exuberance of the decoration proclaimed it to be of Flemish origin, or at least a slavish reproduction made in France.

In the decorative arts, the period of Louis XIII witnessed the introduction into France of foreign luxury furniture, resulting in a more elegant mode of living and the retreat of French taste before this onslaught of foreign influence from the Low Countries, Germany, and Spain. This was followed by an invasion of Italian taste, due to a considerable extent to the Italian-born Cardinal Mazarin, who surrounded himself with luxury to a degree unprecedented in France. Foreign craftsmen came to Paris and were lodged in the Louvre, like the distinguished Dutch cabinetmaker Pierre Golle and the Italians Domenico Cucci and Philippe Caffiéri. A French, Jean Macé of Blois, who studied in the Low Countries, also worked for the Crown and is wellknown as the creator of the French school of marquetry, in which André Charles Boulle was to achieve enduring fame.

Learn about each era: